One day in 1980, members of Weaverland Mennonite Church Earl and Marilyn Weaver received a mailing from the Eastern Lancaster County School district announcing the sale of the Hinkletown Alternative School building. The Weavers found themselves dreaming of a Mennonite school for their children that was closer to home. Earl Weaver called fellow church member Jake Musser to discuss the idea, and together, they decided to meet with church leadership.

Weaverland Mennonite Church leadership held a meeting to gauge interest where 50-75 people affirmed the idea and chose the first five board members. Earl Weaver also contacted the Superintendent of the Lancaster Conference Board of Education, J. Lester Brubaker, who provided invaluable guidance and direction in moving forward with the new school.

In October of 1980, the board bought the school for $227,000. It included a six-classroom building with a common area, the surrounding property, books, desks, and a piano. Many families came together to clean and repair the building in preparation for classes. With the assistance of the Lancaster Mennonite Conference Board of Education, the school hired Mr. Jon Scott Bender as principal, a man who held a clear vision for education as Christ-centered and child-focused. 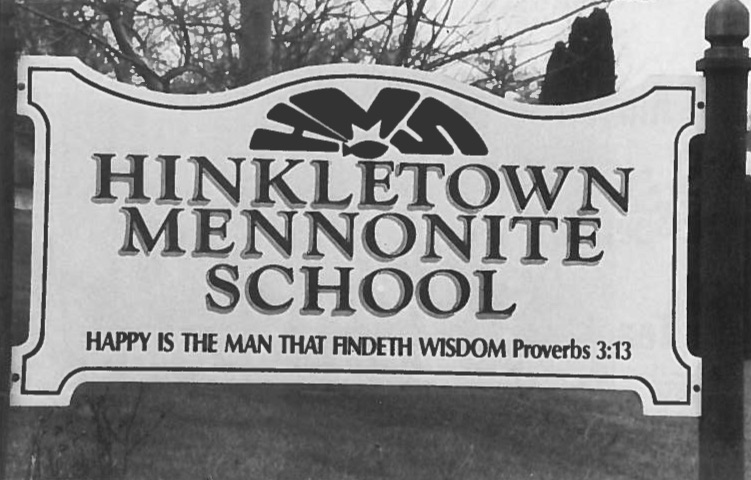 Hinkletown Mennonite School (HMS) opened on August 30, 1981 with 62 students in kindergarten through grade six. Grades seven and eight were added over the next two years. By 1986, the school enrollment had increased to 200 students! With such rapid growth in the first few years, more room was necessary. In 1985 three classrooms and a gymnasium were constructed. Previously-owned modular classrooms were also added in the first decade, along with learning support and art programs. In 2009, the modular units were finally replaced by a two-story, 20,000 square-foot expansion with 12 classrooms and an expanded library area. The school became accredited beginning in 1992 and is now dually accredited through AdvancEd and Mennonite Education Agency.

From the beginning HMS had a reputation for being innovative and creative. Under Principal Bender’s leadership, students did not earn grades for their work, rather they were evaluated on how much they improved based on goals they set with their teacher.  Project-based learning made learning more hands-on. The fine arts were valued and students participated in drama productions: “Jack and the Beanstalk,” “Heidi,” “Hansel & Gretel” and more.  Mr. Bender also wanted students to get to know people from other cultures and backgrounds so he began a partnership with Mennonite Central Committee’s International Volunteer Exchange Program (IVEP) through which HMS hosted an international teacher each year. Still today project-based learning, drama and the fine arts, and the IVEP program continue to be valued parts of HMS’s program.

God’s outpouring of blessing has sustained HMS’s founding vision, growing deep roots that connect faith and learning, nurture creativity and innovation, and welcome both local and global neighbors. Today over 240 students, representing 64 churches and over a dozen countries and language groups, are Learning and Living God’s Purposes at HMS. The building and school community look different than they did in 1980, but the founding vision continues to inspire.